For The Los Angeles Times Istanbul — Only one man has ruled the Central Asian nation of Uzbekistan since it gained independence from the Soviet Union in 1991. Islam Karimov was the Uzbek leader even before independence, and he has held on to power for more than a quarter of a century with all the tools at a despot’s disposal, his many critics say. But Karimov’s grip on his country appears to be at an end, with persistent reports in recent days that he is… END_OF_DOCUMENT_TOKEN_TO_BE_REPLACED

For IRIN News: OSH, 26 May 2015 (IRIN) – Zahira doesn’t like to return to the site, a concrete slab which covers the entrance to the cellar where her twin brother Hassan hid. “Most of us women and children went to camps at the border [with Uzbekistan], but the men stayed behind to protect our homes,” said Zahira*. Hassan was among them. “I called him around noon and he said they were hiding in the cellar. I called again at 5pm and no one answered.”… END_OF_DOCUMENT_TOKEN_TO_BE_REPLACED

For IRIN News: OSH, 24 April 2015 (IRIN) – At a government-run centre for migrant labourers in the Kyrgyzstani city of Osh, 23-year-old Nurbek waits patiently for advice on how to return to Moscow. “My family has lived in Russia for more than 10 years, I want to go back to them,” he said. “I was deported 10 days ago after police said I’m on a blacklist. Now I’m hoping to be removed from the list.” Nurbek is one of around 1.5 million Kyrgyz –… END_OF_DOCUMENT_TOKEN_TO_BE_REPLACED 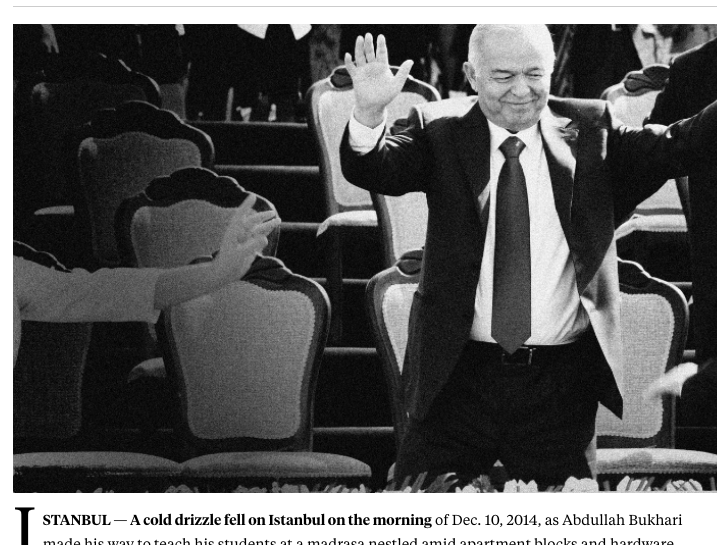 For Foreign Policy: Uzbekistan’s president has jailed, tortured, and murdered his opponents at home. Now, he’s hiring hit men to track down and kill dissidents abroad. ISTANBUL — A cold drizzle fell on Istanbul on the morning of Dec. 10, 2014, as Abdullah Bukhari made his way to teach his students at a madrasa nestled amid apartment blocks and hardware stores in the Zeytinburnu neighborhood. A white prayer cap on his head, Bukhari made two crucial departures from his daily routine, according to one of… END_OF_DOCUMENT_TOKEN_TO_BE_REPLACED